A hotel should be more than a home away from home. Otherwise, why leave? To my mind, a hotel should be fabulous and luxurious and transport one to a different world, far removed from one’s usual habitat.

The newly opened Fendi hotel in Rome combines fabulous with colour, using the most vivid, intense hues. The luxury brand have reconfigured the 17th-century Palazzo Fendi with three separate architecture firms to create a boutique hotel, their largest store, an art gallery space, an apartment, and a restaurant.

Using elements characteristic of the fashion line – geometry and colour blocking, for example – the hotel has an unmistakably Italian aesthetic. Maintaining the original herringbone wood floors and plaster walls, the look is updated with intense hues and jewel tones of blue and green. The interiors were conceived by Milanese Dimore Studio and architect Marco Costanzi, who have created beautiful details using sumptuous materials. 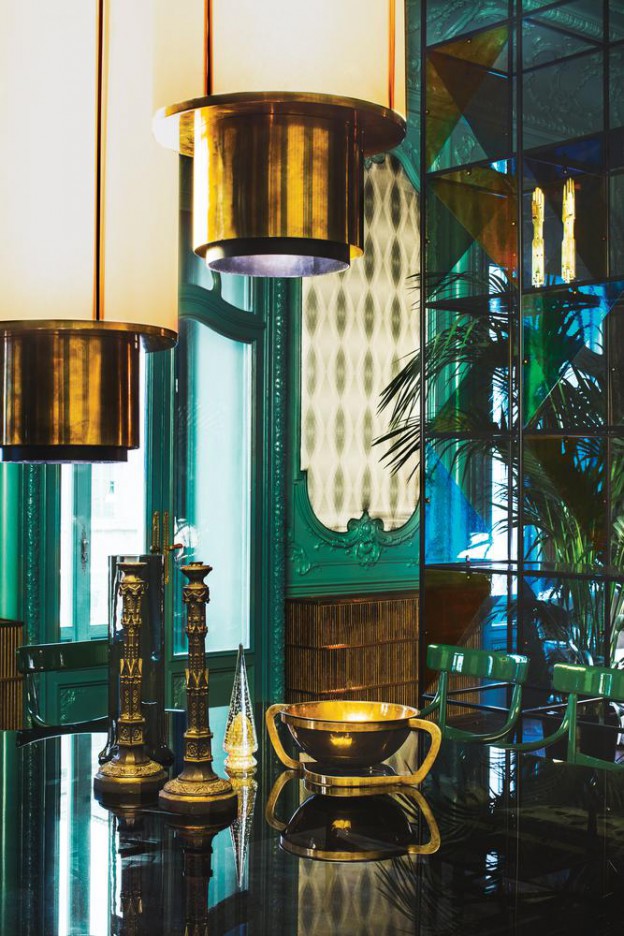 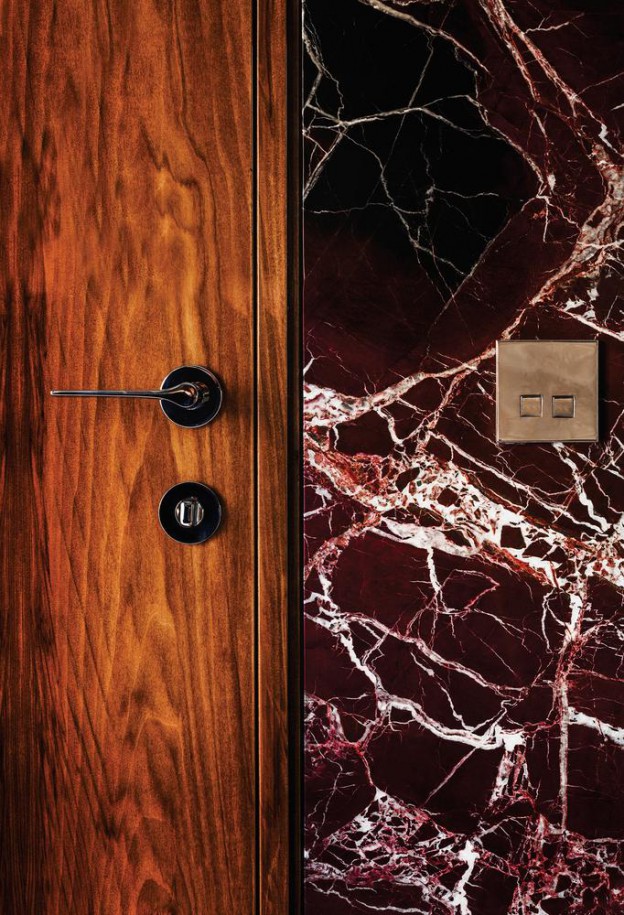 Classic Italian and modernist pieces abound, too; from a daybed by Gio Ponti, Murano glass chandeliers by Venini, art by Lucio Fontana and Josef Albers. 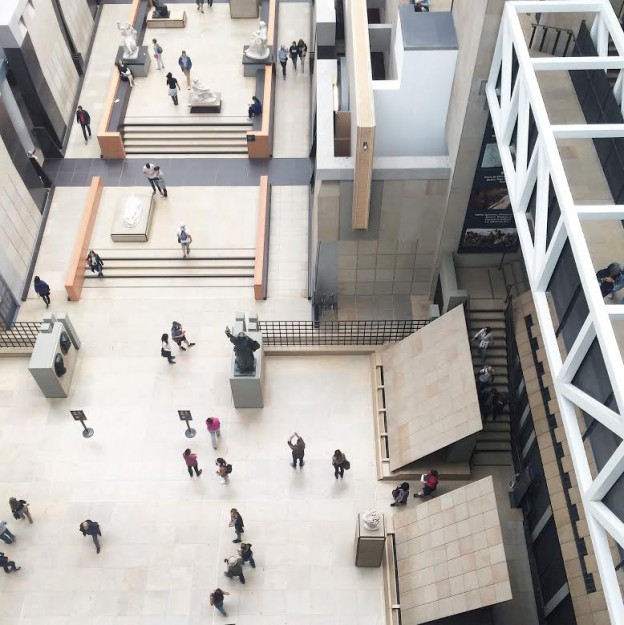 The wonderful Musée d’Orsay, Paris. Catch the Dolce Vita exhibition if you can, (until 13 September) highlighting the Liberty, Futurist and Rationalist periods of the early twentieth century in Italy, with works by Carlo Bugatti, Carlo Scarpa and Gio Ponti. Bellissimo.

Beautiful, highly polished Palladian marble floors with touches of blue inform much of the interior’s colour palette, with palest blue walls and a curvaceous, powder blue velvet sofa. Furniture is sophisticated, elegant: blown glass and brass Bell Tables, an iron, wood and brass screen, Gio Ponti‘s Superleggera chair, a delicate, oval dining table of marble, wood and metal. The ornately carved, wood-lined bay window adds another level of sophistication and a connection with the outside. 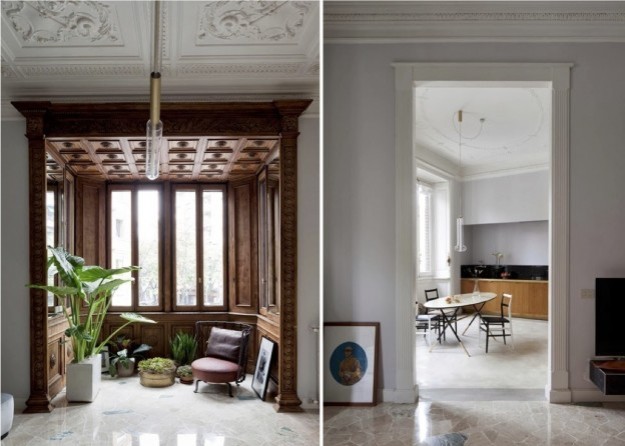 It is an interior that is infused with personality. I find the vivid, cerulean blue master bedroom, with its Vertigo pendant light quite beguiling. What about you? 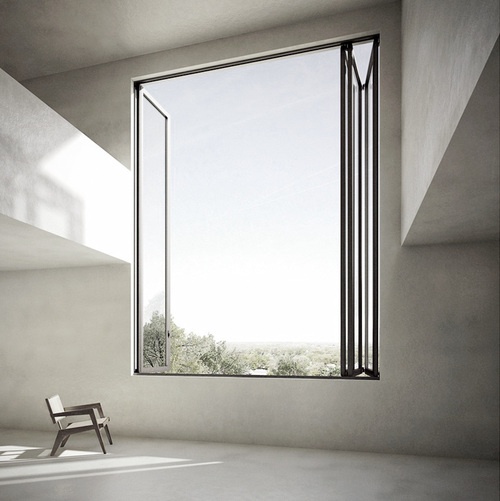 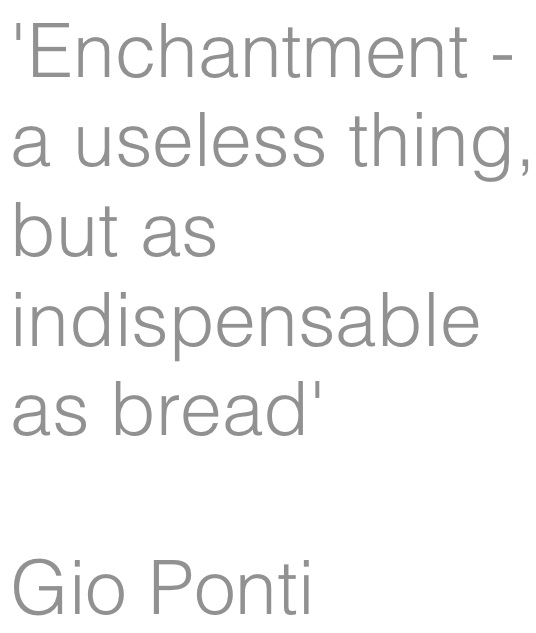 Architect, craftsman, editor, writer, set designer and industrial designer. Founding editor of Domus magazine. Gio Ponti (1891-1979) has long been a design hero of mine, and how wonderfully relevant his designs are even today – all geometric patterns and blue-greys, and all imbued with exuberance and life.

Gio Ponti didn’t simply create buildings. He conceived the building’s interior as well, creating furniture, lighting, appliances, and ceramics, glassware, and silverware. Alice Rawsthorn in the NY Times called him a ‘designer of a thousand talents’ (read the review, here)

The Design Museum opened a wonderful exhibition of his work in 2002. Two quotes of his really resonated for me, as a mantra to follow and at the same time demonstrating his spirit and passion:

‘The architect must imagine for each window, a person at the sill, for each door a person passing through’.

‘Enchantment, a useless thing, but as indispensable as bread’.

Ponti originally trained as an architect and entered industrial design by developing products for Richard Ginori, an 18th-century ceramics manufacturer in Florence, for whom he later became artistic director. As an architect, Ponti’s designs embodied and embraced every era in which he worked. The classical style of his earliest houses in the 1920s, evident also in his designs for Ginori, were heavily influenced by Andrea Palladio’s 16th-century villas. In the forties he designed costumes and sets for the opera and ballet, as well as gleaming chrome espressomakers for La Pavoni. He also started another magazine, Stile. After the war he helped rejuvenate Italian ship travel with a commission to fit out four ocean liners. In the fifties his collaborations with Piero Fornasetti resulted in a series of surreally beautiful residences in Milan. In addition he built the iconic, modernist skyscraper, the Pirelli Tower (1956) in Milan, the Villa Planchart (1953-57) and the Villa Arreaza (1956) in Caracas, Venezuela, which are among the most exquisite houses of the modernist period. There is a wonderful article written by Ponti himself describing the Villa Planchart and his design process, in an archival issue of Domus (read it, here).

Ponti used his writing and editorial roles to champion designers and artists whom he admired, including Carlo Mollino, Piero Fornasetti and Lucio Fontana, and in the process contextualised Italian design within contemporary culture. He always encouraged young designers, even when they challenged his own thinking. Among them were Alessandro Mendini and Ettore Sottsass, who were at the forefront of the 1970s post-modernist movement, which emerged as an alternative to modernism.