Diogene is a minimalist living unit that functions as a self-contained system independent of its environment. It is named after the ancient philosopher Diogenes, who is said to have lived in a barrel because he considered worldly luxuries to be superfluous.

Designed by Renzo Piano (who paradoxically also designed Western Europe’s tallest building, the Shard), Diogene is fully equipped with everything one needs to live. The front serves as a living room, with a pull-out sofa on one side and a folding table under the window on the other. Behind a partition are a shower, toilet and kitchen. It is constructed from wood which also informs the interior; the exterior is coated with aluminium cladding for weather protection. With a footprint of 2.5 x 3 metres when fully assembled, it can be loaded onto a lorry and transported anywhere. The house’s simple exterior, corresponding to a child’s image of a house, belies the complexity of photovoltaic cells and solar modules, a rainwater tank, biological toilet, natural ventilation and triple glazing, all required to allow it to exist autonomously. Diogene has many possible uses: It can serve as a weekend house, as a studio, or as an office. It can be placed freely in nature, but also right next to a workplace, even in the middle of an open plan office. 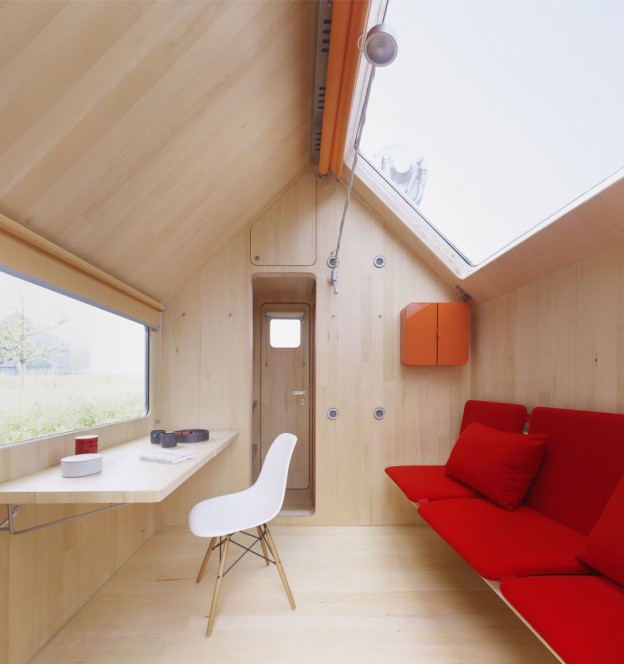 Renzo Piano cites Le Corbusier’s Cabanon as one of his architectural references. Le Corbusier, who believed a house was a ‘machine for living’, constructed the cabin for his own use in the 1950s in Cap Martin in the Côte d’Azur. Based on human proportions – the walls are 2.26m high, the height of a six-foot man with one arm above his head –  it is for me the ultimate summerhouse. More on Cabanon, here

Image of Cabanon via Domus

Renzo Piano’s Diogene is installed on the Vitra campus in Germany. What do you think? Could you live in a house this size? Or is this Airstream caravan, with full size bathtub, more your style? (via the wonderful Girl and the Abode)